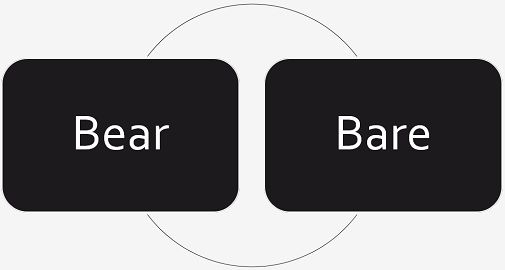 The words ‘bear’ and ‘bare’ are homonyms which are pronounced exactly similar, but they are spelt differently and also differs in their meanings. While the word ‘bear’ has multiple meanings, ‘bare’ has only one meaning. When something is not properly clothed or covered, we mean ‘bare‘.

On the other hand, ‘bear‘ usually refers to tolerate or carry something. Let’s have a look at the examples given below:

From the above examples, you might have observed that the word ‘bear’ and ‘bare’ are used at different places. While the word bare means naked in both the cases, bear means to handle or tolerate.

The word ‘bear’ can be used in two ways, i.e. firstly it can be used as a noun which refers to a wild furry omnivores mammal having a short tail, that moves on the sole of its feet.

Secondly, it can be used as a verb to mean carry, tolerate or endure something, which is not at all pleasant or you don’t like it. It is an irregular verb whose simple past and past participle form is the bore and borne respectively. Let’s have a look at the points presented below to understand its usage:

The word ‘bare’ is used for indicating something which is open to view i.e. without cover, clothing i.e. naked, exposed. It may also refer to something that is without any addition, i.e. straightforward, plain or basic. Let’s look at the points below to understand its meaning:

As an adverb or determiner:

Key Differences Between Bear and Bare

The difference between bear and bare are presented below in the points:

A tip to use the words bear and bare correctly in sentences is that, if you want an adjective, related to uncovering use ‘bare’ whereas if you require a verb related to carrying or supporting, use ‘bear’.

Difference Between Bull and Bear Market