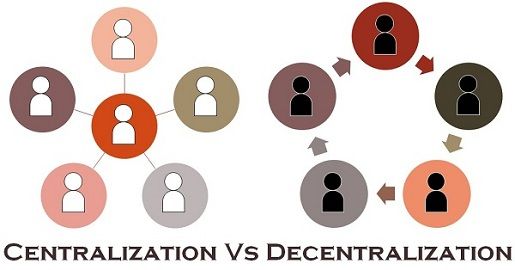 Centralization and Decentralization are the two types of structures, that can be found in the organization, government, management and even in purchasing. Centralization of authority means the power of planning and decision making are exclusively in the hands of top management. It alludes to the concentration of all the powers at the apex level.

On the other hand, Decentralization refers to the dissemination of powers by the top management to the middle or low-level management. It is the delegation of authority, at all the levels of management.

To determine whether an organization is centralized or decentralized greatly depends on the location of decision-making authority and the degree of decision-making power at lower levels. There is a never ending debate between these two terms to prove which one is better. In this article, significant differences between Centralization and Decentralization, in an organization is explained.

A pivot location or group of managerial personnel for the planning and decision-making or taking activities of the organization is known as Centralization. In this type of organization, all the important rights and powers are in the hands of the top level management.

In earlier times, centralization policy was the most commonly practiced in every organization to retain all the powers in the central location. They have full control over the activities of the middle or low-level management. Apart from that personal leadership and coordination can also be seen as well as work can also be distributed easily among workers.

However, due to the concentration of authority and responsibility, the subordinate employee’s role in the organization is diminished because of all the right vests with the head office. Therefore, the junior staff is only to follow the commands of the top managers and function accordingly; they are not allowed to take an active part in the decision-making purposes. Sometimes hotchpotch is created due to excess workload, which results in hasty decisions. Bureaucracy and Red-tapism are also one of the disadvantages of centralization.

At present, due to the increase in competition, managers take the decision regarding for the delegation of authority to the subordinates. Due to which the functional level managers get a chance to perform better, as well as freedom of work, is also there. Moreover, they share the responsibility of the high-level managers which results in quick decision making and saving of time. It is a very effective process for the expansion of the business organization, like for mergers and acquisitions.