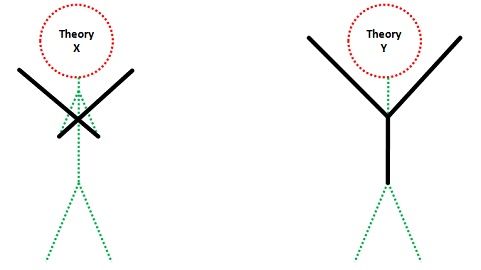 Motivation implies the act of stimulating or inspiring subordinates to pursue the desired course of action. It is something that makes people act or behave in a particular manner. Based on the premises concerning human behaviour, Prof. Douglas McGregor put forward a theory of motivation, called as theory X and theory Y. Theory X is a conventional approach to motivation, based on negative assumptions.

On the other extreme, Theory Y is diametrically opposite to theory X which shows the modern and dynamic approach to individuals and relies on the assumptions that are practical in nature. In this article, we are going to talk about the major differences between Theory X and Theory Y.

Theory X is a traditional model of motivation and management. It takes into consideration, the pessimistic behaviour of an average human being, who is less ambitious and inherently lazy. Authoritarian management style is applied by the management, where the managers closely monitor and supervise each employee.

The premises on which theory X relies are listed below:

On the basis of above assumptions, it is concluded that the management is held responsible for organising resources, for the firm, with the aim of economic gain. Next, the management directs the efforts of the employees and motivate and control their actions, to make them work as per the needs of the organisation. Further, they must be monitored, persuaded, rewarded and punished, or else they will remain idle.

Theory Y is a modern approach on motivation, put forward by McGregor. It uses the participative style of management and assumes that workforce is self-directed and enjoy the work assigned to them, in the accomplishment of organisational objectives. According to the theory, employees are the most precious asset to the company. Given below are the major assumptions of this model:

Based on these assumptions, it can be deduced that management is held responsible for arranging the resources with the aim of achieving economic and social ends. Further, the employees are not indolent by nature, but they behave so, because of experience. Moreover, it is the management’s duty to create such an environment for the employees to help them achieve their goals.

The points given below are substantial, so far as the difference between Theory X and Theory Y is concerned: