National Income, as the name suggests is the income of a nation, measured in terms of production, during the course of a financial year. Hence, when the production is represented in terms of final goods and services, it is called a National Product, whereas when it is represented in monetary terms, it is National Income. It tends to determine the quantum of economic activity carried out during the course of an accounting period.

Contrarily, Domestic Income implies the summation of the factor incomes earned by all the production units, located within the territory of the country.

Important: Here one must note that in a closed economy, domestic income and national income are the same.

The post attempts to shed light on the differences between domestic income and national income.

Domestic Income implies the total money value of the final goods and services produced within the domestic territory of the country, during a specified period, say a year. In this way, it covers factor income of both, residents and non-residents, who are generating income within the country.

Further, domestic product and domestic income are one and the same thing.

For example, Foreign banks and companies that operate and earn income in the country are taken into account while calculating the domestic income.

What is meant by Domestic Territory?

In the simplest sense, the term ‘domestic territory’ refers to the political boundaries of the nation. Further, it also covers:

However, it does not cover:

National Product takes into account the total value of all goods and services arising as a result of economic activity. National Income implies the total of all the incomes earned, within or outside the geographical territory of the country, by its ordinary residents.

Therefore, the two are one and the same thing. This is because, the production of goods and services due to the use of primary factors, which tends to generate income.

What is Factor Income?

Factor Incomes include monetary payment made to the owners of factors of production by the firm for the factor services used, such as rent for land, interest for capital, wages for labor, profit for entrepreneurs.

Who are Normal Residents?

A Normal Resident or Ordinary Resident is the person who ordinarily resides in the country and his/her center of economic interest is present in that country.

National Income along with its Related Totals, helps in indicating the macroeconomic performance and forecasting future events. Here, the term ‘related totals’ mean and include: 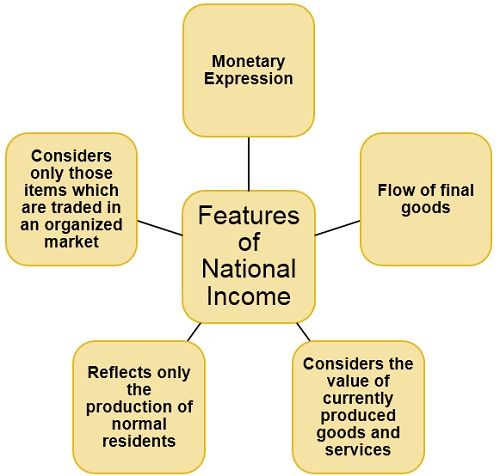 National Income can be calculated at current prices as well as constant prices.

National Income at a constant price is the true indicator of economic growth which is reflected in the standard of living of its citizens, as it is the real national income. An increase in such income occurs due to a real increase in the output.

You can calculate the national income of a country, using the following methods:

As we have understood the basic concept and formula of these two, now we will talk about the difference between domestic income and national income: 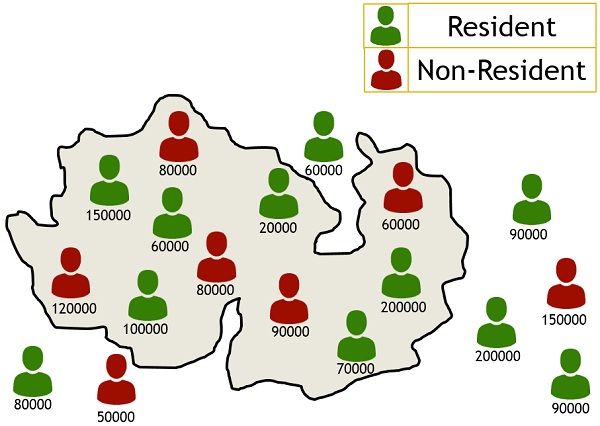 In the above picture, you can see a country, some residents and non-residents who are earning income within and outside that country. So, in this case, let us calculate the domestic income and national income, but first of all, we will recall their definitions.

Monetary National Income is nothing but National Income at Current Prices. This means that goods and services produced during the period are valued at the prices prevailing in the market.

The difference between domestic income and national income is the net factor income from abroad. Further, being a macroeconomic component, it determines the economic growth of a country. It acts as a framework for economic appraisals and projections.