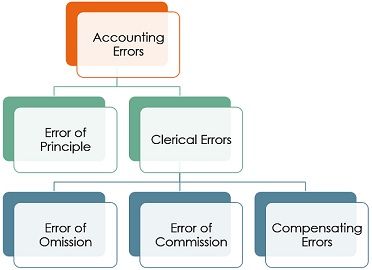 While recording and posting the entries, the occurrence of errors is quite common. Errors are the mistakes committed by the accounts staff while recording and maintaining the books, which cannot be corrected by overwriting.

Errors are divided into two types, i.e. an error of principle and clerical errors. Errors of principle indicate the error of recording a transaction against the basic convention or principle of accounting. On the other hand, Clerical Errors, as the name suggests, are the errors committed by the firm’s clerical staff, in the ordinary course of recording the transaction in a journal or posting it into the ledger.

Now clerical errors are subdivided into three types – Error of Omission, Error of Commission and Compensating Errors. In this article, we are going to talk about the differences between the error of omission and error of commission.


Definition of Error of Omission

Omission means to leave, exclude, forget or skip something. So, the error of omission means an error in accounting in which the accountant forgets or miss an entry while recording the same in the subsidiary books or posting it into the ledger.

Therefore, a financial transaction does not appear in the books of accounts, as it is missed out unintentionally. Further, there is no debit or credit entry in the ledger for such omission, so the trial balance will tally.

Types of Error of Omission

Definition of Error of Commission

An error is said to be an error of commission when it is incorrectly recorded in the books of accounts. It occurs when the accounts clerks or bookkeeper deliberately commit the error, due to ignorance, inexperience, carelessness, lack of complete knowledge. It encompasses:

Key Differences Between Error of Omission and Error of Commission

The difference between error of omission and error of commission are discussed in the points given below:

While recording the entries, if it is identified that an error is committed one can correct the same by neatly striking out the previous (wrong) entry and passing the correct entry. However, if the error is detected after some time, then in such a case, one has to pass a rectification entry to correct the wrong entry.

Difference Between Journal and Ledger

Difference Between Manual and Computerized Accounting

Difference Between Embassy and High Commission