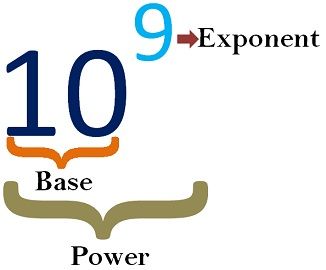 In mathematics, you might have noticed superscript, i.e. a little digit that is placed above and to the right of any number. The large the number is the difficult is to read, compare and operate and due to this reason, superscripts are used to convert larger numbers into the smallest form. This is done with the help of powers and exponents, that are the basic concept of mathematics but are also juxtaposed by many students. Exponents represent the number of times the base is multiplied.

On the other hand, when it comes to power, it consists of two parts, i.e. a base number and the exponent. So, take a read of the article to understand, the difference between exponent and power.

In mathematics, exponent implies the small number, positioned at the up-right of the base number. It represents, the number of times the base number is used as a factor, i.e. multiplied by itself. It can be numbers, constants and even variables. Whenever exponents are used to expressing a large number, the process is termed as raising to power.

Power is nothing but a number expressed with the help of exponent. It is the product of repeated multiplication, of the same factor. There are certain special terms used in this regard, which are:

Key Differences Between Exponent and Power

The difference between exponent and power can be drawn clearly on the following grounds:

When the numbers are expressed, without an exponent, are in standard form, but when it is expressed with exponent, then that form is called exponential form. The exponent is the little digit placed upper-right of the given number, whereas the power is the whole expression, containing the base number as well as the exponent.

Difference Between Factors and Multiples

Difference Between Ratio and Proportion