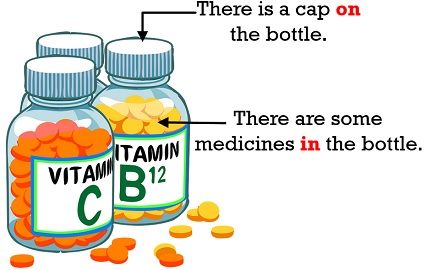 Prepositions are the words that are used in sentences to show location or the relationship between the noun or pronoun with the other element in the clause. English speakers usually face confusion in using prepositions like ‘in’ and ‘on’. We use the word ‘in‘ when we talk about a situation in which something is enclosed by something else.

On the other hand, ‘on‘ is used to talk about a situation when the object is placed above or outside something else. Now, let’s take a look at these examples to understand them in a better way:

The word ‘in’ is a preposition, used in sentences to mean something in an enclosed place (i.e. a space having physical or virtual boundaries) or surrounded by something else. We’ll understand the use of ‘in’ with the help of the points given below:

The word ‘on’ refers to a situation in which something is in physical contact with something else or having the support of the something. Let’s discuss when to use ‘on’ in the sentences:

Key Differences Between In and On

The points given below are substantial so far as the difference between in and on is concerned:

To know the difference between in and on, one must know about their uses first. Secondly, there are certain rules regarding the use of the words in and on, which must be understood clearly, to use them correctly and confidently in the sentences.

Difference Between Between and Among