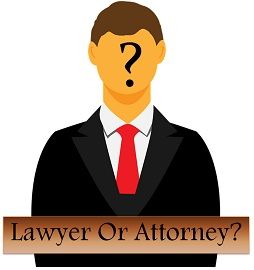 When it comes to legal proceedings, people highly juxtapose, the epithets ‘lawyer’ and ‘attorney’, as these two share a number of common characteristics. A lawyer is a person who studies law and gives legal advice to the clients. These are the members at the bar.

On the other hand, an attorney is a person who is so appointed to act on behalf of the client, in legal matters. To become an attorney, there is no compulsion to clear the bar exam, but if one wants to become lawyer, it becomes mandatory.

Until and unless, a person does not belong to the legal profession, it is a bit difficult for him/her to understand the difference between lawyer and attorney. But, here in this article, we’ve simplified it for the readers.

Lawyer, as the name recommends, is someone who has studied law and is legally certified as trained in it. He/She is the one who gives advice to the people on various legal matters and undertakes lawsuits in the court on behalf of their clients but may or may not practice it. In order to gain the license for practising law, one has to attend the law school, acquire a relevant degree and should clear the bar exam.

A lawyer is proficient in law and knows how to practically apply legal theories and knowledge, in order to solve specific cases or to provide litigation services to the clients. There are a number of functions performed by them, which includes writing contract, drafting will, drawing legal documents, provision of legal services, carrying out the intent of deceased, protecting intellectual property and so forth.

An attorney, or otherwise known as attorney-at-law, is an authorized member of the legal profession who has got the license to practise law in the court.

Besides performing all the tasks and duties of a qualified lawyer, he/she also represents a client to transact legal matters at the court, i.e. a lawyer is someone who is legally qualified and so appointed to act or speak for the other person to prosecute or defend him/her, in the court of law.

To become an attorney at law, a person is required to attend the accredited law school, pass the bar exam, get the stipulated degree and license, so as to practice law in the court of justice.

Key Differences Between Lawyer and Attorney

The difference between lawyer and attorney can be drawn clearly on the following premises:

By and large, an attorney can be called a lawyer, but a lawyer may not certainly be an attorney. The role of a lawyer or attorney may differ and largely depend on the jurisdiction, we are referring to. Even, there are some countries, where no such line of demarcation between lawyer and attorney. Therefore, for such countries, these two legal epithets are one and the same thing.

Difference Between Customer and Client