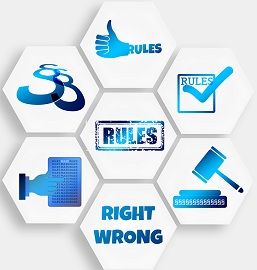 Law is used to mean the rules made by the government to protect the fundamental rights of the citizens. Non-compliance or violation of the law can lead to punishment such as imprisonment or penalty. Laws are classified into two groups procedural law and substantive law, wherein the Procedural law administers the operation of a particular case, by conforming to the step by step process through which the case passes.

On the contrary, the substantive law can be defined as one that comprises of statutory rules passed by the legislature, through the process of enactment, regulating the conduct of citizens. It talks about the structure and facts of the lawsuit.

The article presented to you simplifies the difference between procedural law and substantive law, so take a read.

The procedural law can be defined as the law which governs the way in which court proceedings are undertaken. Simply put, it explains the methods and practices, that are followed in the court for a case, i.e. the gradual phases of the lawsuit that will take place and the way in which case is managed in the court. So, it describes the series of steps taken in civil, criminal and administrative cases.

As procedural law determines the procedure of all lawsuits, it complies with the due process. Due process pertains to the person’s legitimate right to have legal proceedings if he/she is sued.

The procedural law determines the means of imposing rights and providing remedies to wrong. It consists of rules concerning jurisdiction, pleading, appealing, presenting evidence, executing judgement, cost and the like.

Substantive law is used to mean the written law that states the rights, duties and liabilities of the citizens and collective bodies. It is the system of rules that regulate the behaviour of the citizens of the country. It is generally codified in statutes but can also be found in common law.

Substantive law is concerned with the substance of the case. It either helps in suing someone or defending a person from legal proceedings.

It is that part of the legal system which differentiates between right and wrong conduct and personifies the idea that committing the crime will lead to penalty or punishment or both (as the case may be) to the wrongdoer.

The fundamental differences between procedural law and substantive law, are discussed in the points given below:

Difference Between Lawyer and Attorney

Differences Between Rules and Regulations