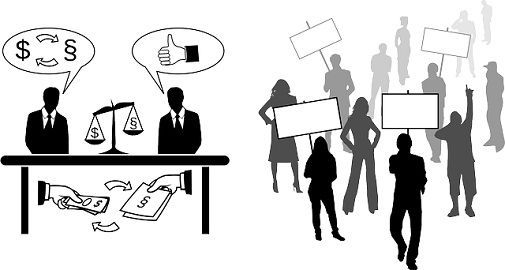 Lokpal is an ombudsman appointed to work on citizens complaints and grievances regarding corruption at the central level. On the other hand, at the state level, Lokayukta is set up to take action against the corruption complaints made by the residents of the state.

Corruption, in simple terms, refers to the unauthorized use of public power, typically by a public servant or by an elected politician. It is a dishonest act, which is not permitted in the eyes of law. Many countries have established an anti-corruption body, to eradicate corruption, which was initiated for the first time, in Sweden. In India, on the recommendation of the Administrative Reforms Commission (ARC), bodies like Lokpal and Lokayukta are set up under Lokpal and Lokayukta Act, 2013.

The article excerpt might help you in understanding the difference between Lokayukta and Lokpal.

Lokayukta can be understood as an independent anti-corruption statutory body established in states, to fight against corruption. On the receipt of any complaint regarding corruption or bribery of the public official working at the state level, members of legislative assembly or ministers etc. Lokayukta comes into the picture, to deal with it and investigate the case thoroughly.

Even before the Lokpal and Lokayukta Act, 2013 was enacted in the country, many states have already set up Lokayukta for combating corruption, of which Maharashtra was the pioneer state.

The composition of Lokayukta is different in different states of the country. Lokayukta is the head of the body who can be the Judge of the Supreme Court or Chief Justice/Judge of the High Court. Moreover, there is an Uplokayukt, who can be a Judge of High court or any central or state government employee whose scale of pay is greater than or equal to Additional Secretary to the Government of India.

The Governor of the concerned state appoints both Lokayukta and Uplokayukta for a period of six years.

Lokpal is an anti-corruption institution formed under the Lokpal and Lokayukta Act, 2013. The institution works as a government body to investigate and enquire the bribery and corruption complaints of a public official, ministers and secretaries to the government and all the matters related to it.

Lokpal comprises of a Chairperson and several other members, whose strength should not exceed eight members, of which 50% shall be judicial members and 50% shall be from SC/ST/OBC, minorities and women. The Chairperson can be the ex-Chief Justice of India, or an ex-Judge of Supreme Court or a judicial member, who have good knowledge and expertise of more than 25 years in public administration, anti-corruption, vigilance etc.

Key Differences Between Lokayukta and Lokpal

The point given below clarifies the difference between Lokayukta and Lokpal:

The main objective of these two institutions is to combat corruption. It is not just to punish those who perform public services for private gain, but also to expose them publicly. These bodies deal with the complaints against the administrative acts of the public servants, ministers and secretaries to the government.