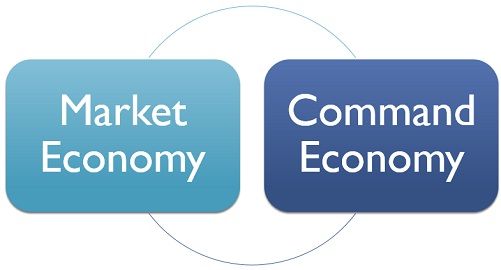 Both market economy and command economy are two opposite ends of the economic setting. The basic difference between these two lies in the way prices are determined, division of labour, government interference, distribution of income, etc.

A market economy is an open economic setting characterised by the free flow of commodities between buyers and sellers, based on its demand and supply in the market. In this economic system, the decisions concerning production, distribution and investment are ascertained by free competition between businesses.

In a market economy, the factor markets have a crucial role to play in the allocation of resources, such as land, labour, capital etc. Here, businesses have the liberty to manage and use productive resources as required, intending to earn profit by creating products or delivering services which are valued by people. Wages in this economy reflects the contribution of the members.

It is the central planning authority which sets preferences as to the production, distribution and consumption of goods and services. The products are produced on the basis of the requirements of people. It aims at fulfilling the basic needs of all the people in an efficient manner. The government decides the job and pay for the workers.

The difference between market economy and command economy are described in the points below:

Difference Between Economics and Economy