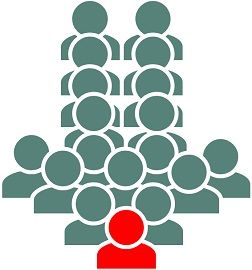 Henry Fayol, a Mining Engineer and Executive of France, who listed out 14 Principles of Management. Two such Management theories are Unity of Command and Unity of Direction. Unity of Command proclaims that each employee is accountable to one supervisor and thus, get orders from him, relating to the task to be performed.

Unity of Direction, on the other hand, signifies that the series of activities having similar objective should be performed as per a single plan and that too under one boss.


Definition of Unity of Command

Unity of Command is a Principle of Management, given by Henry Fayol, which states that each subordinate in a formal organization should get an order from and report to one superior. As per this principle, dual subordination is completely ignored, i.e. an employee will be responsible to one supervisor, who in turn report to the manager, and the chain continues. The person to whom the employee should be responsible is directly above the employee’s position, called as immediate boss.

Unity of Command results in less confusion and chaos, regarding the task assigned to the employee and results in the effective discharge of duties. It indicates an integrated system of instructions, so as to enforce the command. The doctrine is based on the assumption that an employee cannot shoulder orders from more than one boss.

Definition of Unity of Direction

Unity of Direction is another management principle laid down by the French Mining Executive Henry Fayol, stating that there must exist only one superior and one plan for a range of activities seeking the attainment of the same objective. On the basis of this principle, those tasks which are aligned towards the same objective should be lead by one manager, using a single plan.

Unity of direction is a result of sound organization structure, leads to unity of action and coordination in the pursuit of the ultimate goal of the organization.

Key Differences Unity of Command and Unity of Direction

The difference between unity of command and unity of direction can be drawn clearly on the following grounds:

By and large, the two management theories are helpful in the discharging the activities of the organization satisfactorily. Unity of Command is just to ignore confusion, disorder, and chaos in the tasks assigned by different superiors. On the flip side, the unity of direction is to match the activities with the organization’s objectives.

Difference Between Fayol and Taylor’s Theories of Management

Difference Between Principal and Principle