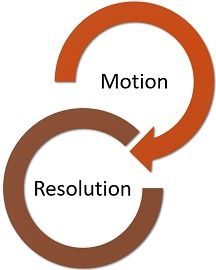 A motion becomes a resolution when the required majority of members accept it. Practically, one member proposes a motion, and another member supports it. The following methods demonstrate the adoption of motion:

The motion refers to any proposal brought forward to the House that prompts a decision. Resolution is nothing but the general opinion of the Members of Parliament. This is a formal expression of opinion or a decision agreed upon by all.

With that in mind, we are going to discuss the difference between motion and resolution.

Motion implies a formal suggestion at a meeting. This is meant for deliberation by the members on the matter concerned and ending up with a decision. The matter may be any matter of importance or public interest.

To determine the will of the Parliament, each matter in the House is decided through a question. This question is addressed to the Chairperson on a motion made by a member.

The motion becomes a resolution when the decision is passed. The decision can be positive or negative.

In general, one member proposes the motion, and another member second that motion. That is to say, he agrees or supports that motion. And the rest of the people vote in favour of or against the motion.

Also Read: Difference Between Parliamentary and Presidential form of Government

Resolution is the accepted motion or the decision taken in the meeting. The meeting can be a general meeting of companies or the meeting of Members of Parliament. It is binding in nature.

Motion turns out as a resolution in the following way:

If the votes cast in favour of the motion is more than the votes cast against it. The motion becomes a resolution. To cast the vote the members have to be present in person.

To become admissible, the resolution must fulfil the given conditions:

Key Differences Between Motion and Resolution

In the following section we will discuss the differences between motion and resolution:

There are three types of motion:

The three types of resolution are:

Motion facilitates discussion on a matter. However, resolution is the declaration of opinion on that matter. While a motion is brought before the members verbally. The resolution is penned down, for the purpose of recording.