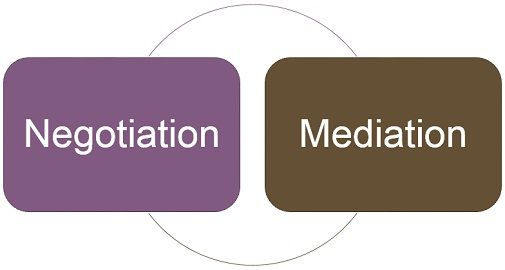 In many cases, parties under dispute look for an out-of-court settlement, by using Alternative Dispute Resolution (ADR) methods which are not just quick, but affordable too. One such method is mediation. It is an assisted negotiation in which a mediator is appointed by the parties concerned so as to listen to both the parties and assist them in finding a better solution.

Now you must be wondering, what is negotiation? Negotiation is a process in which parties with conflicting interest come together to discuss and decide the outcome which can be adopted to manage and resolve the dispute.

What is Alternative Dispute Resolution (ADR)?

Alternative Dispute Resolution (ADR), as the name suggests, is a mechanism, wherein outside the court dispute settlement takes place between the parties. These are classified into statutory measures and non-statutory measures. One of the best things about ADR is that it is a private and confidential technique.

In this post, we will talk about the differences between mediation and negotiation.

Negotiation refers to a systematic process based on bipartite dialogue between parties in conflict that seek to reach a mutual agreement, by finding a win-win solution for both. Here, the term conflict does not mean quarrel, unrest, or disruption, rather it implies disagreement between parties concerning their interest and rights.

However, it requires compromise from both sides in order to be effective. And so both the parties must gain and lose something.

In the case of negotiation, the focus is made on the issue relating to the conflict, rather than the overall relationship. Moreover, the mutually settled agreement arrived at, by way of negotiation can be in the form of a treaty, code, or contract.

Negotiation arises when there are alternative outcomes of a situation, in which the parties in dispute are interested, however, there is a disagreement regarding the final outcome.

Example: Suppose you go to the market to buy some fruits, and you asked for the price of 1 kg grapes and the shopkeeper replied Rs. 120. Then you requested to sell those grapes at Rs. 100 per kg, but the shopkeeper negotiated and settled at Rs. 110 per kg. This process is called Negotiation.

There are three possible outcomes of negotiation: 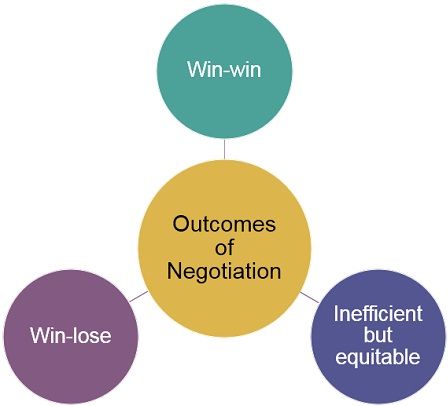 Mediation is an industrial dispute settlement system, which is non-binding in nature. In this method, an independent and unbiased third party is called in by the parties under dispute, to assist them in arriving at a solution that is mutually agreeable to both.

During mediation, the mediator appointed by the parties attempts to bring agreement between the parties concerned by initiating communication and offering multiple solutions, to the stand-off issue. Further, it creates such an environment that eases interaction between the parties.

Mediation is sought when:

Who is a Mediator?

Mediator refers to a professional and experienced outside party-appointed with an aim of dispute resolution. He/she must possess integrity, independence, and unbiasedness.

The role of a mediator is more like an advisor to the parties. This means that a mediator does not have decision-making power, rather he assists the parties to reach a settlement, by listening to the issue, suggesting solutions, communicating with and persuading the parties.

Therefore, whatever solution is proposed by the mediator in this regard, is not binding on the parties concerned, i.e. it is up to them, whether they want to adopt it or not.

Key Differences Between Negotiation and Mediation

Now as we have already talked about the basic concepts of the two terms, we will discuss the differences between negotiation and mediation: 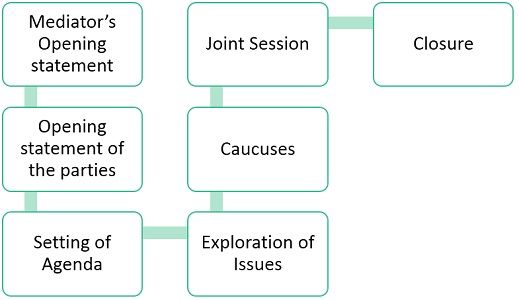 In the first stage, the mediator determines his neutrality and describes the process of mediation to both parties. Further, the parties are informed about the fact that whatever they state during the proceedings will remain confidential and won’t be disclosed even when they go to court for the purpose of settlement. The mediator needs to gain the trust and confidence of the parties by creating such an environment that can help in negotiation.

2. Opening statement of the parties

At this point, the parties will explain the case from their own perspective, along with their perception and interest.

Thereafter, the setting of agenda takes place, wherein the mediator decides the sequence in which the negotiation will proceed so that the parties can evaluate the progress themselves.

The mediator assists the parties in concentrating upon the issues and also exploring them further.

Also called a private session. In this stage, parties get an opportunity to put forward their side in front of the mediator one by one, separately. A mediator is not allowed to disclose the information given by one party to another party during the proceeding.

Once the parties agree to the terms of each other, a voluntary settlement between them is reached to settle the dispute.

1. Identification of the problem

Different issues be it related to wages, additional economic benefits, institution, and administration are being identified. The nature of issues affects the entire negotiation process, including the selection of representatives, period of negotiation, etc.

At this stage, both the parties prepare in advance the multiple issues to be discussed during negotiation, and representatives are selected for carrying out the negotiation.

For this purpose, a chief negotiator is appointed who presents the issue under consideration. Thereafter, the representative of both the side put forward their initial demands and also present their views. during the course of the procedure, the representatives must focus on understanding what are the purposes of the other side, so that they can present the counterarguments. This continues till a final settlement is reached.

To sum up, we can say that the parties in conflict can choose any ADR method to resolve their dispute, without going to court. In both the two methods discussed above, the parties can control the outcome, considering their interest and preferences.