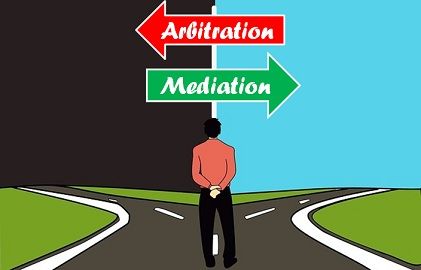 The occurrence of the dispute is very common in every field not only in business, especially when the issue is related to an opinion, unanimous agreement of the parties is rare. There are various alternatives of dispute settlement, like conciliation, mediation, arbitration, adjudication, collective bargaining and so on. Of these, mediation and arbitration are two processes which are employed in lieu of litigation process, so as to resolve conflicts between the parties.

Mediation is described as a method of dispute settlement, wherein the parties need not go to the court, for a solution, rather an informal meeting takes place in which neutral third party, i.e. mediator, helps them to arrive at a decision, accepted to both the parties.

Each and every participant is said to take an active part in the hearing. Further, the process is a confidential one, in which the details of the discussion are not revealed to any other person, outside the hearing.

The mediator, is independent, does not pass any judgement or give guidance, but build consensus between the parties concerned, through communication and negotiation techniques. He/She plays the role of a facilitator, by encouraging interaction between the parties.

The process aims at arriving at a decision, which is agreeable to both the parties. In case, the mediation does not result in any agreement; then the parties can resort to arbitration or litigation.

Arbitration implies a procedure in which an independent third party studies the dispute in detail, listens the parties involved, obtains relevant information and then takes a decision which is considered final and binding on the parties. It is a formal meeting, which begins as a claim and ultimately the dispute is submitted to one or panel of arbitrators, who makes the judgment after taking into account all facts and evidences relating to the dispute.

The process is much like a court room proceeding; it is a private trial wherein the dispute is settled outside the court. The parties provide testimony, the third party looks after evidence and impose a decision which binds both the parties and is legally enforceable.

Key Differences Between Mediation and Arbitration

The difference between mediation and arbitration can be drawn clearly on the following grounds:

Both the processes can be voluntary or compulsory; wherein the third party need not be trained. Choosing between the two alternatives is very confusing and tedious task because both have their pros and cons.

Mediation ensures confidentiality but the does not guarantee the attainment of the outcome. In contrast, arbitration gives guaranteed result, but the confidentiality of the matter is at stake and at the same time the cost of arbitration is greater than mediation. So, before opting any of the two processes, first identify your requirements, suitability and the worth of the decison. Only then you will make a right choice of process for the dispute.