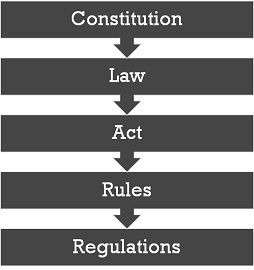 Regulations imply the directives which a body or authority creates and maintains. These are lawfully enforced. As against, rules are the basic guidelines of instructions that states the way of doing something correctly. These are the principles that direct the conduct or behaviour of a person in an organization or country.

Act only contains the basic structure of any law. While creating any act, there are a few issues which lawmakers do not address in the act. And the authority to create law on those issues is delegated to the central or state government. And so rules are framed to counter those issues.

Further, they are always created according to the acts. Hence, they never contradict the provisions of the act. This is because the power to create rules is drawn from the section of the act itself.

There are some acts in which independent bodies are created. So, how these bodies will regulate themselves? For that purpose, regulations are created.

In this post, we will explain to you the difference between rules and regulations.


What are the Rules?

In legal parlance, as we know that the legislative body of government makes laws, i.e. acts. The executive body of the government implements those laws. And to do so, rules are created for the implementation of these acts, i.e. how they will be applied to the general public.

At the time of the creation of an act, there are a few issues that are left unaddressed. And the authority to create laws to address those issues is in the hands of the central government.

Rules are the standard methods and procedures, concerning any provisions which the act contains.

Rules are the basic set of instructions for the general public which states the do’s and dont’s, i.e. what you are allowed and not allowed to do. These are made to exert control, direction or influence on someone. It is a widely accepted principle that says the manner in which any action should be performed.

Rules are something that grown-up people teach young children how to behave in society. You might have observed that parents and guardians set rules for their kids when they are young. They do so, to keep their kids safe.

For example,
Parents often tell their kids not to play outside the garden of their home. The aim of setting this line is to safeguard their child from getting injured by any accident or falling etc.

Parents also tell their children to respect all, no matter if they are elder or younger than you. They also get to know that it is wrong to fight with others.

One must note that rules are established in all nations and societies. Also, these are accepted by all. Further, they vary from country to country and society to society. The difference in their rules is because of the beliefs, values, social interactions, policies and type of government that exist in these countries.

What if someone breaks these rules?

If any person breaks them, they have to face a penalty which can be in the form of a fine or punishment which is inflicted upon the person who breaks them. Sometimes, people even have to face serious consequences like going to jail, for the violation of rules.

The rules are established with the purpose of:

Regulations are nothing but delegated legislation. This means that the right to create law is delegated to other authorities.

There are some independent authorities and statutory bodies created under an Act which have the power for the implementation of the act. These bodies function according to the regulations created by the body itself for their own governance. Regulations are subordinate to rules.

In short, we could say that,

They are the norms that regulatory organizations lay out in writing, so as to specify certain types of behaviour so as to standardize and govern the conduct within the enterprise. These derive authority from the legislation.

The main objective of the application of regulations is to address the gaps in the existing legal system.

Regulations are the way in which the statutory bodies manage and regulate themselves.

Similarly, there are some other statutory bodies also which have their own regulations such as SEBI, RBI, IRDA, CCI and PCI.

Key Differences Between Rules and Regulations

In the points stated below we have listed the differences between rules and regulations:

This act is created by Parliament. The implementation of this act is a work of the executive branch, i.e. the central government. So central government brings Rules for its proper implementation. Now, two bodies come into existence, as a result of this Act – the National Human Rights Commission (NHRC) and the State Human Rights Commission (SHRC). Both the bodies have framed regulations for their own governance.

So, we have understood that it is not necessary that every act should have provisions to create rules or regulations or both. There are many acts in which we have to read only the acts and rules while in others you have to go through the regulations along with the act and others may have none or both. It simply depends on the requirement of the act.

Difference Between Written and Unwritten Constitution

Difference Between Rules and Policies