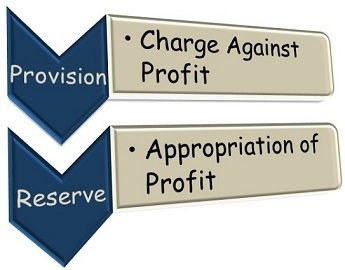 In the business glossary, provision implies money set aside to cover an anticipated liability or loss. Look the other term Reserve, reserves refer to withholding some amount for any use in future. Provision and reserves are two terms which are highly confused, but they carry different meanings.

While running a business, some expenses or losses relate to the current financial year, but their amount is not known, as they are not yet incurred. For such expenses/losses provision is created, as a charge against profit. Likewise, a certain portion of the profit is retained in the business as reserves, to utilize them at the time of need, or to invest it in growth activities, or to cover future contingencies. Reserves are the only appropriation of profit.

So, the basic difference between provision and reserve is that net profit is calculated only after giving effect to all provisions, whereas reserves are created only after reckoning profit. Check out the article to know some more differences.

The Provision means to keep aside a particular sum of money to cover up an anticipated liability which arises from the past events. It is a recognition of an expected obligation, which will result in the outflow of cash from the business. The amount of the liability should be easily estimated by the entity to provide for it.

The recognition is to be made to provide for a known liability or decrease in the value of assets over time or a disputed claim whose probability of occurrence is maximum.

If a provision is made in excess of the amount what is required, then after paying off the liability, it needs to be written back to the profit and loss account.

The Reserve is a fraction of retained earnings, which is kept aside for any use in future. It is regarded as a part of shareholder’s fund. The sum appropriated in the name of reserves can be used for any of the given purposes:

The reserves are mainly divided into following categories:

Many accounting and business experts are of the view that it is always considered good to save some money for an uncertain future. That is why companies create reserves for conserving money to meet out the future losses.

Key Differences Between Provision and Reserve

The major differences between Provision and Reserve are as under:

Provision and Reserves both decreases the profit, but the creation of provision is a must to cope up with the known future expense. Liabilities must be recognized as and when they arise, and that is why provisions are made for the same. Reserves are a little different; they are created to preserve some money for bad days because nobody knows what will happen in future, and so experts are in favor of  creating reserves.

Difference Between Retained Earnings and Reserves

Difference Between Balance Sheet of a Company and a Bank