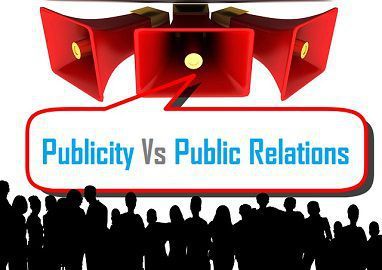 Public Relations (PR) means professionally handling a positive public image by the company. It is an important element of promotion mix, that helps in maintaining good relations with the public.

On the contrary, Publicity is infotainment, i.e. which tends to inform and entertain the general public at the same time. It provides some interesting, juicy, controversial news to the general public, that has the capability of changing their opinion or outlook, about the product or company.

While the main aim of publicity is to gain maximum possible media coverage, public relations is about getting the attention of the target audience. This article might help you in understanding the difference between publicity and public relations, in detail.

Publicity is defined as the way of disseminating information to the public at large, through media. It can be in the form of news, stories, event information or write-ups, that creates awareness and credibility in the people regarding a brand, product or the company offering them.

Publicity aims at spreading the information or news, to the maximum number of people, in minimum time. It is a non-paid form of communication, which is not under the control of the company. It can be a positive review regarding a product, i.e. mobile, television, refrigerator, etc. given by a satisfied customer, or information published in the newspaper regarding the quality-rich services provided by a company, or it can be a simple word of mouth, etc.

In a nutshell, publicity has nothing to do with the company’s sales; it is all about creating awareness in general public through editorial or unbiased comments concerning a product.

Public Relations can be understood as the strategic management tool, which helps an organization to communicate with the public. Here, ‘public’ means the group of people that have an interest in or impact on a company’s ability to achieve business objectives. It is not only concerned with getting public attention, but it also aims at reaching the goals of the organization, by communicating the message to the target audience. It includes press releases, crisis management, social media engagement, etc.

Public Relations is all about maintaining the positive image of the company in the eyes of the public and developing strong relationships with them. It encompasses a range of programs organised by the company to promote its product and services. There are many companies, which have public relations department, which looks after the attitude of the appropriate public and also spread information to them, to increase the goodwill.

The difference between publicity and public relations can be drawn clearly on the following grounds:

By and large, publicity and public relations are different from one another, as in publicity is when someone or something is being noticed by the media, and people are informed about it. Unlike, public relations, is all about taking such steps, to maintain a good relationship with the interested public, which includes customers, government, shareholders, creditors, suppliers, government, etc.