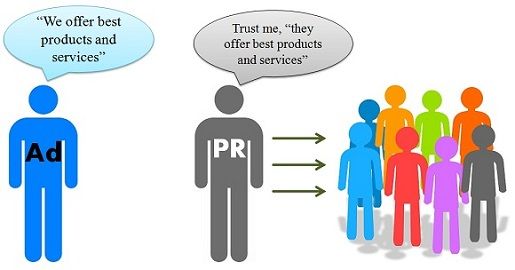 On the other hand, public relations is about building and maintaining good relations, with company’s stakeholders, by gaining favourable publicity, having a good reputation and so on.

The primary motive of any business is profit maximisation, and it can only be achieved by increasing sales. The firms apply many strategies, tactics, tools, plans to gain maximum customer attention and grab a competitive position in the market, that comes under promotion mix. There are four aspects of promotion, i.e. advertising, direct selling, sales promotion, and public relations.

Advertising can be done through print ads, radio or television ads, billboards, flyers, commercials, internet banner ads, direct mails and so on. The advertiser has exclusive control over what, how and when the ad will be aired or published. Moreover, the ad will run as long as the advertiser’s budget allows.

As advertising is a prominent marketing tool, it is always present, no matter the people are aware of it or not. Nowadays, advertising has not left a single medium to spread the message to the target audience.

Public Relations is a strategic communication tool that uses different channels, to cultivate favourable relations for the company. It is a practice of building a positive image or reputation of the company in the eyes of the public by telling or displaying the company’s products or services, in the form of featured stories or articles through print or broadcast media. It aims at building a trust-based relationship between the brand and its customer, mainly through media exposure and coverage.

The difference between advertising and public relations can be drawn clearly on the following grounds:

Advertising and Public Relations both use communication channels to inform and influence the general public. While advertising is a highly expensive marketing tool, because it can reach a large number of people at the same time. Public Relations is free of cost implied endorsement along with validation of the third party.

Difference Between Publicity and Public Relations