In geometry, there are many types of a quadrilateral i.e. parallelogram, rhombus, square, rectangle, trapezium, and kite, which share common characteristics, due to which people face trouble in understanding these figures. A rhombus can be referred as a slanting square, whose adjacent sides are equal. On the contrary, a parallelogram is a slanting rectangle with two sets of parallel opposite sides.

The basic difference between rhombus and parallelogram lies in their properties, i.e. all the sides of a rhombus have the same length, whereas parallelogram is a rectilinear figure whose opposite sides are parallel.

A quadrilateral whose length of its sides are congruent is called a rhombus. It is flat shaped and has four sides; wherein the facing sides are parallel to one another (see figure given below). 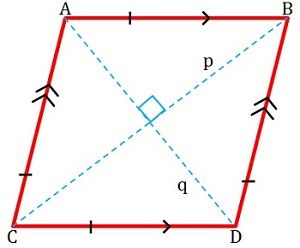 The opposite angles of a rhombus are equal i.e. of the same degree. Its diagonals meet each other at 90 degrees (right angle), therefore, perpendicular to each other and forms two equilateral triangles. Its adjacent sides are supplementary, which means that the sum of their measure is equal to 180 degrees. It is also known as an equilateral parallelogram.

A parallelogram as its name suggests is a is described as a flat shaped figure, having four sides whose set of opposite sides are parallel and congruent (see figure given below). 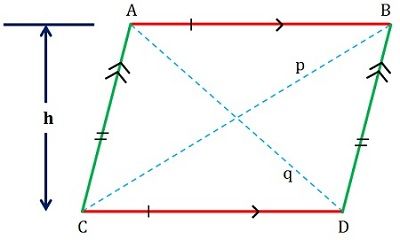 The measure of its facing angles is equal and consecutive angles are supplementary, i.e. the sum of their measure equals to 180 degrees. Its diagonals bisect one another that forms two congruent triangles.

Key Differences Between Rhombus and Parallelogram

The difference between rhombus and parallelogram can be drawn clearly on the following grounds:

Both parallelogram and rhombus are quadrilateral, whose facing sides are parallel, opposite angles are equal, the sum of the interior angles is 360 degree. A rhombus itself is a special kind of parallelogram. Therefore, it can be said that every rhombus is a parallelogram, but the reverse is not possible.

Difference Between Area and Perimeter

Difference Between Latitude and Longitude

Differences Between Skewness and Kurtosis

Difference Between Histogram and Bar Graph

Difference Between Length and Height