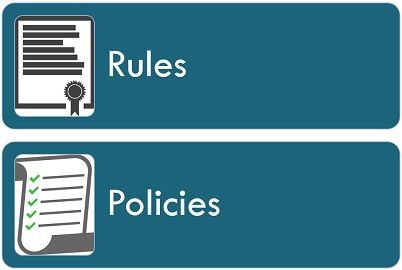 Rules, in an organization, are made to inform its members, what they can do or what they are not allowed to do. It states the acceptable behaviour, along with the consequence of disobedience. Rules do not just ensure discipline in an organization but it also helps in regulating the work culture and environment.

On the other hand, the formulation of policy accounts for an integral part of planning, which is meant to act as a guide to decision making. It recommends the broad considerations which must be taken into account while taking any decision. It also sets the boundaries within which the decisions are to be taken.

Rules – a set of instructions, regulations and guidelines for standard behaviour. It determines the acts which are to be performed or not to be performed, within the organization. It is indicated in the form of orders, warnings, prohibitions and norms, so as to maintain discipline or to standardize or restrain, the behaviour of individual and group. 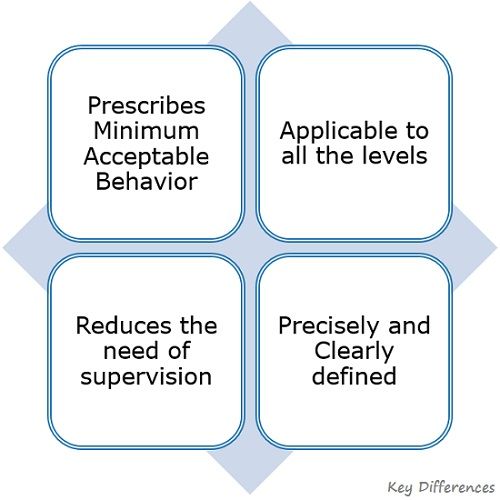 Rules demand obedience and so any person who does not adhere to the company’s rules are subjected to punishment or penalty. Hence, strict action is taken by the company, against the people who violate or disobey the rules. Further, there is no room for discretion in case of rules, so they need to be followed stringently. Exceptions to the rule might be there, but only in certain circumstances, and they are also limited.

Policies can be defined as the basic statements which are used to guide the thinking and direct the efforts of the managers towards the accomplishment of objectives. Simply put, it is the typical response, to a specific problem, which dictates the manner in which the organization handles issues, in different cases.

Policies are formulated for every level, as decision making is done at each level of management. And, so policies do the job perfectly by predetermining the problems which are encountered frequently and repeatedly, so as to avoid redundant analysis of the same issue and resolve them without much discussion. Moreover, it provides an integrated structure or base to the managerial decision making. 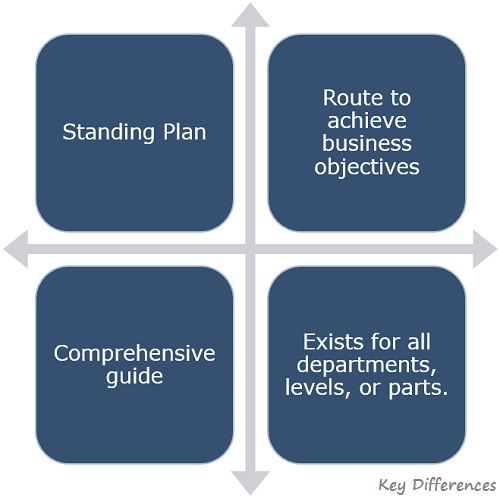 Further, while making the policies for the organization, the top management must invite the views of the employees, as they are the ones who are actually going to deal with it. It determines the limitations and draws a line, for discretion and judgement of the managers, at the time of decision making.

These provide general direction to the managers to follow so as to handle situations appropriately, at the time of decision making. However, deviations can be there in the form of exceptions and also in case of extraordinary situations. It determines the way in which a manager should try to tackle routine management responsibilities.

Policies play a crucial role, as it facilitates the lower level management to handle issues at their own, without going to the top management, for every matter.

Also Read: Difference Between Single Use Plan and Standing Plan

Key Differences Between Rules and Policies

The points stated below give a clear insight into the differences between rules and policies:

So, what we have understood is that policy is the organization’s personalized approach to deal with the issues. It determines the overall framework, as to scope and limits, within which a manager has to work. Further, the basic motive behind the making of rules is to ensure an environment of discipline. Therefore, rules are the instructions which the employees has to follow them as they are, i.e. without modifying them.

Difference Between Policies and Procedures