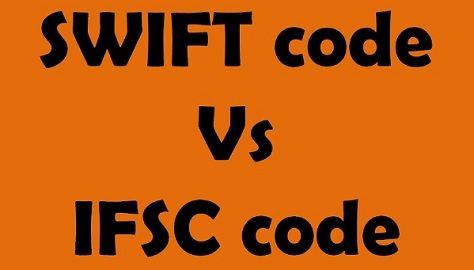 SWIFT stands for Society for Worldwide Inter-bank Financial Telecommunication, which is a cooperative non-profit organization, fully owned by its member banks. SWIFT code is used when the transfer between two banks happens internationally. It is an electronic message transfer system, that conveys messages in a pre-defined format, anywhere in the world as and when the transaction occurs.

On the other hand, IFSC code is used when the fund transfers between banks take place within the geographical boundaries of India. It is an alphanumeric code, that recognizes the bank-branch taking part in the electronic fund transfer system.

These two are the unique identification codes that need to be mentioned at the time of digital money transfer. There are notable differences between SWIFT code and IFSC code which are discussed in this article excerpt.

SWIFT is a short form for Society for Worldwide Interbank Financial Telecommunication Code. A unique identification code assigned to a specific bank to proceed money transfer between banks internationally. Moreover, the code is also used when there is an interchange of messages between banks.

SWIFT code is allotted to the financial as well as the non-financial institution. The code is a combination of 8 or 11 alphanumeric characters. The details of the code are provided below.

The code is a combination of 11 alphanumeric characters whose details are provided below:

All the bank branches within the country are assigned an IFSC code by the Central Bank of India. The code is used by the interbank fund transfer systems to proceed the message to the respective bank branch.

The important differences between SWIFT code and IFSC code are mentioned below:

Difference Between NEFT and IMPS

Difference Between EFT and ACH