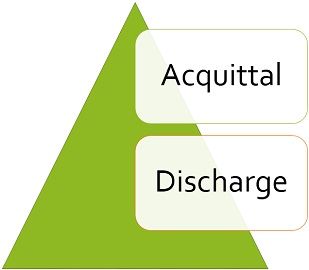 Criminal Procedure Code, 1973 is concerned with criminal law, in India. It permits the Court to acquit or discharge the person arrested, in relation to the alleged offence. There is a wide misunderstanding among folks that acquittal and discharge are synonyms, but that’s not true. While Acquittal is a verdict by the Judge, that the accused is not guilty of the offence which is charged on him.

On the contrary, discharge means the act of releasing a person from custody, due to insufficient grounds, to further proceed with the case.

What is a Trial?

A legal examination of the facts and evidence by the Judicial Magistrate or Judge, so as to make a decision regarding the guilt or innocence, as to civil or criminal case. The trial starts after framing the charge and it concludes with conviction or acquittal of the accused.

This post is to enlighten you with all the laws and rules relating to the concept and difference between acquittal and discharge.

Acquittal is the verdict given by the judge, that legally confirms the innocence of the accused. Hence, it is given when the court finds that the accused has not committed the crime, charged on him. It implies that the prosecutor remained unsuccessful to prove in the court that the case is beyond a reasonable doubt.

Now, you must be wondering what does reasonable doubt means?

Basically, reasonable doubt is a standard of proof, of a supreme level, which needed to be provided to obtain a guilty verdict.

When Acquittal is given?

According to Section 227 of the Criminal Procedure Code, on considering the record of the case and documents submitted in relation to the case, and after hearing both the parties, the Judge believes that there are not enough grounds for further proceedings against the accused, the accused shall be discharged.

So, the accused can be discharged when sufficient evidence is not present against him. The court has to state why the accused has been discharged from the case.

Important: Discharge of the accused can be given by the Judge only after taking into account the formal statement by one of the parties to the case, in the charge sheet or the concerned case law.

The court must take into account the charge sheet and documents presented, by the Police. The essential elements of Discharge are:

When the aforementioned conditions are met, the accused shall be discharged

Cases when Session Judge is obligated to Discharge the accused

Key Differences Between Acquittal and Discharge

So far we have discussed, the meaning and sections relating to the two terms, let us now understand the difference between acquittal and discharge:

Discharge of the accused takes place when there is ‘No sufficient grounds to proceed with the case. Here, no sufficient ground means that a reasonable person cannot arrive at a conclusion that there exists any base or reason to continue the alleged charge against the accused concerning the offence.

When the Session Judge is of the view that the trial is going to be ineffective or a waste of time, he is bound to discharge the accused.

Acquittal procedure plays a crucial role in Criminal law, to make certain that an innocent is not punished for an offence, which is not committed by him. However, the victim can make an appeal to the court, if he/she believes that the accused has been acquitted, wrongly.

Difference Between Investigation and Inquiry