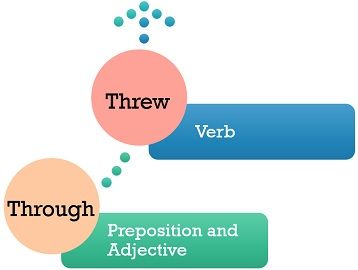 The words ‘threw and through’ are homonyms, which sounds the same, but they cannot be used interchangeably. This is due to the fact that these words are not only spelt differently, but their meanings also vary. Through refers to the motion of a person or an object in and out something. It can also be used when you are done with something.

On the contrary, threw can be used when something is launched by using a hand with a bit force through the air. Read out the examples given below to understand the difference between these two:

From the given examples you might have understood that the words can be used in many different ways which based on what the meaning of the sentence is intended. In the first sentence, the word threw express ‘propel’, whereas through means ‘from’. In the next case, ‘throw’ means ‘to hold’, while through denotes ‘by way of’.

The word ‘threw’ is a simple past tense form of the verb ‘throw’, whose past participle form is ‘thrown’. It primarily refers to release something with hands using a little or great force by a forward movement of arms and wrist, through the air, so as to get rid of it. However, it can be used in various contexts, which are discussed in the points given below:

In general, the word ‘throw’ is used with phrases such as throw away (= to trash something), throwback (= a reversion to previous time), throw in (= to add something to an offer), throw off (= to keep oneself aside), throw oneself into (= to indulge in an activity with a zeal and excitement), throw oneself at ( = to seek someone’s attention or interest) and many more.

We use the preposition ‘through’ to indicate some form of movement from one end to another, to refer to penetration or passage. As an adjective or adverb, it is used to indicate time, when talking about the accomplishment of something. Let’s take an overview of the points discussed below, to understand its usage:

Key Differences Between Threw and Through

There are some differences between threw and through, which are explained in the points given below:

The basic difference between these two lies in their meaning and usage, i.e. we use ‘threw’, to cast something in order to dispose of or discard it. On the other hand, ‘through’ is used when you pass from a specific point to another point.

Difference Between Could and Would