Bad Debt refers to the sum due from the debtors, which remains unrealized, and so they are written off in the company’s books of accounts. As against, doubtful debts refer to the debt, with which there is an uncertainty, as to the degree to which amount will be recovered from the debtor.

Goods and services are sold for the purpose of generating revenue for the business. However, all the goods are not sold in cash, and goods on credit are allowed to a number of customers. So, the customers to whom goods are sold on credit are called debtors.

What is a Debt?

If out of the total sum due, a certain percentage of the sum is not recovered due to non-payment, and the amount due from debtors is called debt.

This post will enlighten you on the difference between Bad Debt and Doubtful Debt.

When goods are sold to the customer on credit and the customer does not pay the outstanding sum and he/she is declared bankrupt by the Court, then the amount owed by that customer is considered as a bad debt, which is a loss to the firm. The amount which is not recovered is a loss, for the business.

The concerned debtor’s account is closed in the books of the firm and at the end of the period, the bad debt’s account is transferred to the debit side of the Profit and Loss Account.

Debts usually turn out as bad because of: 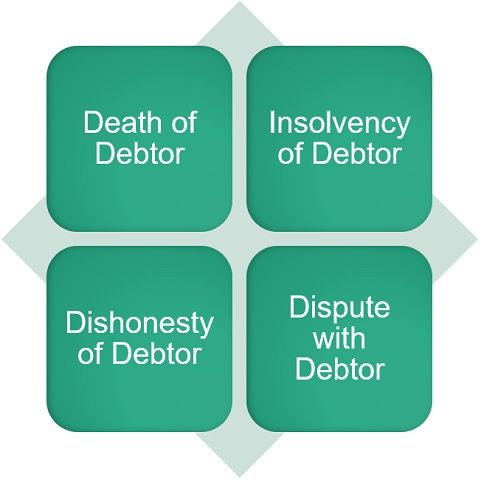 What is Provision for Bad Debts?

When it is expected that the outstanding amount to the customers will not be recovered, it is advisable to recognize the anticipated loss. This can be done by decreasing the current year’s profit and entering the amount to the credit of the special account, i.e. Provision for Bad Debts.

Doubtful Debt refers to that portion of debt whose recovery is not certain. Therefore, for such debts, there is a possibility that the firm may face losses in the future.

At the end of the financial year, the balances due to customers’ accounts are calculated and the portion which is likely to be irrecoverable is estimated. In practice, the amount whose recovery is uncertain cannot be treated as a loss on the date at which the balance sheet is prepared and so it cannot be written off. However, based on the past history of the firm, it needs to be charged against the Profit and Loss Account of the firm.

Also, with the purpose of protecting against the probable loss, a provision is created called Provision for Doubtful Debts. The provision creates a charge against profit. When we create provision, a certain sum is set aside, so as to make good the loss, if the doubtful debt turns out as bad debts.

Debts usually turn out as doubtful because of: 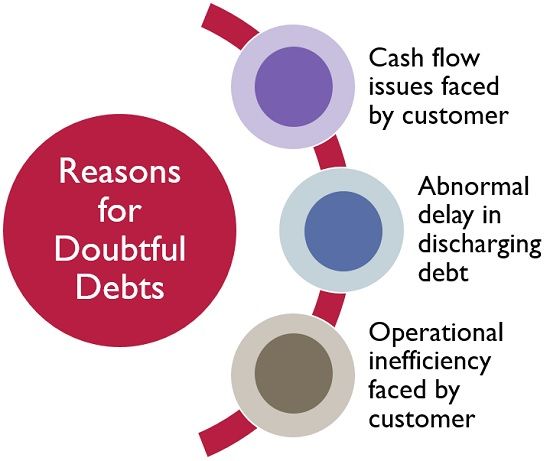 What is Provision for Doubtful Debt?

Provision for Doubtful Debt implies the provision made to offset losses of anticipated bad debts, that may arise in the future, using a predetermined percentage of the Sundry Debtors, so as to ensure certainty in the amount of bad debts charged to each financial year.

After having an in-depth discussion on the meaning of the two terms, now we will discuss the differences between bad debts and doubtful debts:

Important: It is worth noting that no entry will be made in the customer’s account until the amount due is actually written off.

Explanation of Provision for Bad Debts

Suppose the amount due from a customer is Rs. 80,000 and it is doubtful that the customer may not pay the sum. So, the firm does not want to write off the sum for the time being. In the next financial year, the debt becomes bad debt, which needs to be written off.

So, here the question arises, ‘To which year the loss belongs – current year’s or next year’s?‘ Well, obviously it is the current year’s loss, even when the amount is written off next year.

Therefore, the firm must provide for the loss in the current year. As the amount which is to provide for is not known. One can simply make a logical guess and decide on an arbitrary figure to be provided for. In this way, the profit for the current year will be reduced by the said amount and the amount is treated as a provision. So, any amount which is to be written off next year should be deducted from the provision created in this regard.

Bad Debt is a debt of which nothing can be recovered, and it is written-off as uncollectible in the books of account. On the other hand, doubtful debt is just an estimation of the amount whose collection is unsure and may turn out as bad debt in the future.

Difference Between Provision and Reserve

Difference Between Bill Discounting and Factoring