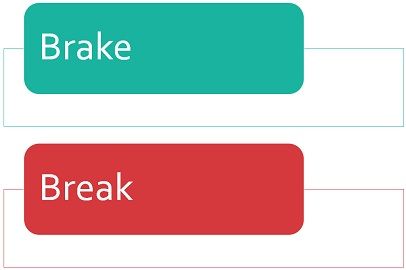 The homonyms break and brake are so similar in their pronunciation that sometimes it is really hard to identify which one is used in a sentence. Further, when it comes to their spelling, it resembles a great extent. However, their meaning is quite different. Break means to tear something into pieces either by a hit or drop.

On the contrary, the brake is nothing but a device that is used for slowing down the speed or stopping the vehicle. Let’s have a look at the examples given below to understand the difference between these two:

In these two sentences, you might have observed that the word ‘brake’ is used in connection with the vehicle only, whereas break has different meanings in both the two sentences. In the first sentence, it refers to violation of the rules, whereas in the second case it refers to shatter.

The word ‘break’ can be used as a verb which means to cause physical harm to something unexpected in a vigorous manner, through which it stops working or it is completely damaged.

It may also be used as a noun to mean an interruption or interval in the continuity, i.e. to take a pause. Further, it has several meanings, which depends on the context of the sentences. It can be both transitive and intransitive verb, as it sometimes takes an object, but sometimes, it does not. The points given below will help you in understanding their usage:

Key Differences Between Break and Brake

The points presented below are noteworthy, so far as the difference between break and brake is concerned:

To sum up, there is a huge difference between break and brake, i.e. while break means to split or shatter something into pieces, or to take a pause, brake implies a mechanism used to reduce the speed of moving vehicles of wheels, or to stop its motion.

Difference Between Loose and Lose