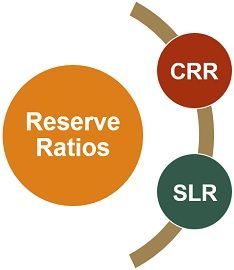 Commercial banks are mandated to hold a fixed proportion of their average cash balance, as a reserve with the central bank, the amount of which should not be less than the specified percentage of Net Demand and Time Liabilities is called Cash Reserve Ratio (CRR).

On the other hand, SLR or Statutory Liquidity Ratio is the amount which a commercial bank is required to maintain in the form of liquid assets, i.e. cash, gold and bonds, before extending loans to its customers.

What are Demand Liabilities?

What are Time Liabilities?

Time Liabilities mean the amount of money which is made payable to the customer after a period of time, i.e. the withdrawal from the account cannot be made immediately, rather the customer has to wait till the completion of that period. In other words, these are the liabilities which are not payable on demand, such as:

In this post, we will explore the differences between Cash Reserve Ratio (CRR) and Statutory Liquidity Ratio (SLR), in detail.

Cash Reserve Ratio, or otherwise called as CRR is the percentage of Net Demand and Time Deposits, that the commercial banks are obligated to keep with the central bank of India, i.e. RBI – Reserve Bank of India, in the form of cash. So, the banks are not allowed to use that money, kept with RBI, for economic and commercial purposes.

CRR is an effective tool which governs the banks lending capacity, as well as control the supply of money in the economy. Typically, it is in the form of the cash available in bank vault physically or deposits made with the apex bank. 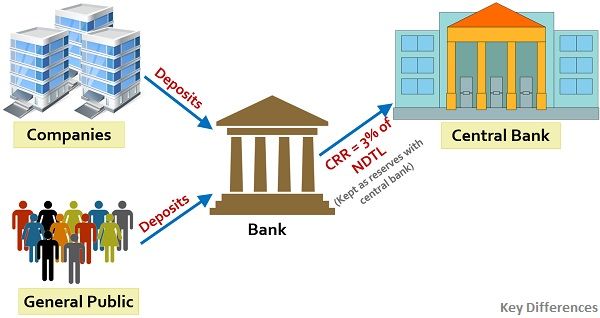 In which year CRR was introduced?

Cash Reserve Ratio (CRR) was introduced in the year 1950 for the very first time, as a measure to ensure safety and liquidity of bank deposits.

At the close of business every day, the banks are required to maintain a minimum proportion of their NDTL as liquid assets, which is called as SLR. Statutory Liquidity Ratio, or SLR refers to the percentage of Net Demand and Time Deposits, that the banks are obligated to keep with themselves as reserves at any point in time, in the form of: 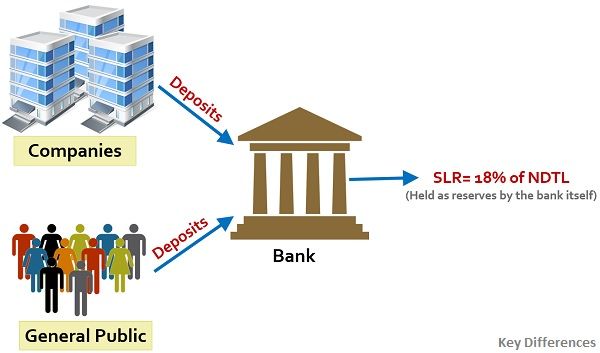 Key Differences Between CRR and SLR

The points of differences between CRR and SLR are discussed here in detail:

Effect of Change in Rates

The increase and decrease CRR and SLR will have the following effect:

Suppose the rate of CRR and SLR is 3% and 18% respectively, and the net demand and time liabilities (NDTL) of the bank is Rs. 100 crores. So, the bank has to keep 3 crores (3% of 100 crores to maintain CRR) in the form of cash and cash equivalents with Reserve Bank of India (RBI). Along with that banks has to reserve 18 crores (18% of 100 crores to maintain SLR) in the form of liquid assets with themselves.

Therefore, the loanable amount with the bank would be 100 crores – (3 crores + 18 crores) = 79 crores, which can be used for extending credit to customers.

On the other hand, SLR is another measure used by the Central bank to maintain the stability of the economic system by limiting the credit facility offered to its customers.