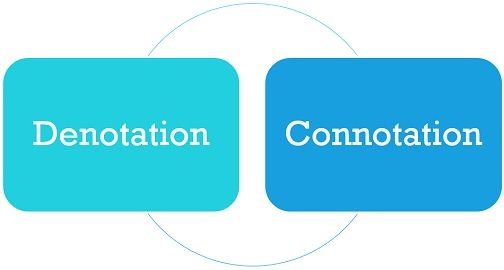 The denotation of a word refers to its ‘definition as per dictionary’. There are some words that share similar denotation, but they do not have the same tone, i.e. one can be positive and the other can be negative. In spite of two words have the same denotation, they can have a varied tone or energy, i.e. their connotation can be different. It is the tone or energy associated with the word that clicks our minds when we listen to the word.

Denotation implies the true dictionary meaning of a word which is the central meaning of the expression. It is the precise and straightforward definition of that term with no emotions or feelings attached to it. Moreover, the meaning of the word remains the same irrespective of personal experiences.

For Example, The words ‘house’ and ‘home’ have similar denotation, i.e. a place where someone lives. However, they may not be used in the same context. Similarly, the denotative meaning of the words ‘cheap’ and ‘economical’ is low-priced or inexpensive but are commonly used in different contexts and cannot be used interchangeably.

There are many words that have more than one meaning or they impliedly mean something different than their actual definition that we find in the dictionary. This is what we call connotation. It exists with the denotative meaning of the word.

Connotation can be the positive or negative association that words carry with them. This means that every word that we use has a charge that can be positive or negative, there are also some words that are neutral and they generally have an impact and influence on the way people feel when they hear them.

For Example, the words ‘selective’ and ‘picky’ have similar dictionary definitions or denotation i.e. ‘careful about choosing things’. However, their connotations are different, i.e. while selective has a positive connotation, picky has a negative connotation.

Moreover, the connotation of the same word used in different contexts can also vary. It reflects the personal aspect of the meaning and the emotional thoughts that are associated with the word, It differs as per the experience of the persons as people have common experiences and so, there are certain words that carry shared connotations.

Furthermore, the words also hold different degrees of intensity. For example, the words, sad and depressed are synonyms and carry a negative connotation, but depressed is considered as more intense in comparison to sad.

The words may also differ in terms of gender. For example, we use beautiful for girls while handsome for boys, which are actually synonyms.

Key Differences Between Denotation and Connotation

As we have understood the meanings with examples, let us now talk about the differences between denotation and connotation:

While denotation is the actual or exact meaning of the term, connotation refers to the emotion which the term brings or generates in the mind of people, together with its actual meaning. The connotative meaning of the term can have a huge impact on the statement that a person makes. Hence, if you pick a word with a negative connotation, the statement made by you can have a different impact on the person, then you were hoping.

Difference Between Do and Does

Difference Between Adverse and Averse

Difference Between Stress and Burnout