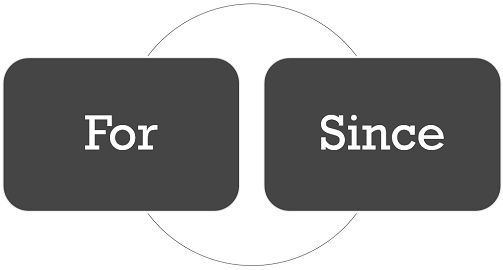 We often get confused between the prepositions, for and since, as both of these two are used to talk about how long the action continues. However, these two are different in the sense that since is used when we are talking about a specific point in time, whereas for is used when we discuss the duration of something. Let’s have a look at the examples below to understand them further:

In the above examples, you might have noticed that since is used with specific time, event or state, whereas for is used to express duration.

Basically, ‘for’ is a function word (preposition) that indicates the desired objective. When for is used with respect to time, it refers to the period of time to express how long something persists. Now come let’s understand its uses, with the points given below:

The word ‘since’ means ‘from then until now’, i.e. something that started in the previous time, but is continuing in the present. It expresses the initial point of an event, action or state. It can be used as a preposition, conjunction and an adverb. Now let’s understand its uses:

Key Difference Between For and Since

The difference between for and since can be drawn clearly on the following grounds:

The crucial tip to understand the difference between for and since is that since is used to highlight a time or a specific event, in the past, that lead to a situation which is still continuing. On the other hand, for is mainly used to indicate the amount of time, taken or passed so far.

Difference Between By and Until

Difference Between Sometime, Some time and Sometimes