In olden times, in the absence of any medium of communication and technology, people used to store data in the form of written records. During that time, people used to write on palm leaves or bark of a tree and that handwritten sheet is popularly known as a manuscript. A script is a form of writing, which over a period of time evolved as language and then it is developed as literature.

At that time, important messages and memories are engraved on rocks, pillars, clay tablets, and copper plates, by the rulers, which are called inscriptions. These help in reconstructing the history of the country.

This post describes the main differences between manuscripts and inscriptions, along with interesting facts and some practical details about them.

A manuscript is a primitive and handwritten composition which records events, information, and memories of the past. For the purpose of keeping records:

As the manuscript is written on perishable material due to which they have a very short life and so some of them get either partially or fully destroyed by insects, infected by fungus, or decompose over time while some survived. They are preserved in temples, monasteries, and archives.

These are ancient books of that time. The manuscript contains contemporary events which tell us about our past and inform us about the customs, religious beliefs practices, cultures and lifestyle (both social and economical) of the people and the traditions followed by people during that time.

They are an authentic source of information that tells the history of a country, as they bring forth the name of the king or ruler, years they ruled administration, the extent of their era, and dynasty as well. Also, they tell the language and lifestyle of the people, military achievements, social and religious conditions.

The subject in which we study inscriptions is known as Epigraphy. These are premier and copious sources of the political, social, commercial, and economic history of the country. Hence, for historians, inscriptions are an amazing tool that provides information about contemporary events and common people of that time. These are available in languages like Sanskrit, Tamil, Prakrit, Telegu, and so forth.

There are a number of inscriptions that carry relevant information about genealogy, dynastic details, the extent of empire, and names of those kings whose name has not been referred in ancestry.

Additionally, the inscriptions written in various Indic scripts, which are used for different purposes.

There are mainly nine types of inscriptions, depicted hereunder: 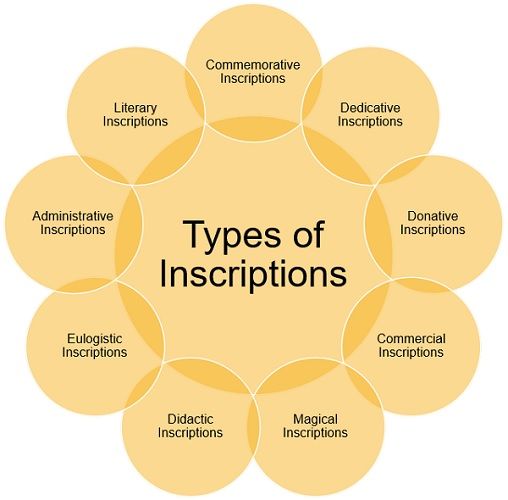 Let us discuss each of them, one by one:

There are also a number of inscriptions that contain long panegyrics, that praise the kings and boasts their administrative powers.

Key Differences Between Manuscripts and Inscriptions

As we have discussed the meaning and importance of these two literary sources of ancient times. Now we will talk about the difference between manuscript and inscription:

What did the manuscript contain?

Manuscripts contain information related to religious beliefs and practices followed by the people, the lifestyle of kings and rulers, medicines to cure certain diseases, and scientific information. Many manuscripts also contain poems, plays, and epics written in languages like Sanskrit, Prakrit, and Tamil.

How do scholars know what information is written in the inscription?

Inscriptions were carved more than a hundred years ago and with the passage of time the script, as well as the language, have changed. Therefore, a process called Decipherment is used by scholars to understand the matter written on the inscription.

What is a Script?

The script is a system or style of writing a language. When the sounds of a particular language are represented symbolically, it is termed as a script.

In a nutshell, both manuscripts and inscriptions are important as they contain the past of the country, its society, culture, achievements, events, etc. Hence, they need to be preserved with care and caution.

Difference Between Essay and Report

Difference Between Autobiography and Memoir

Difference Between Play and Drama