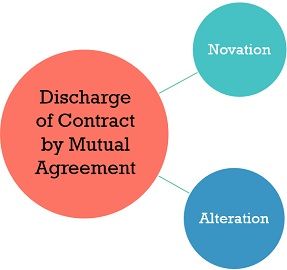 Novation is a situation in which a fresh contract is substituted for an old contract, between the same or different parties, whereas alteration is when there is a change in the terms and conditions of the contract.

What is Discharge of Contract?

To put simply, discharge means cancel, hence discharge of a contract means its cancellation. When there is the cessation of contractual relation amidst the parties, i.e. promisor and promisee, it is called the discharge of contract. This means that the parties are no longer liable for the performance of the contract.

Therefore, with the discharge of the contract, the rights and obligations of the parties come to an end.

Modes of Discharge of Contract

What is Discharge by Mutual Agreement?

This write-up will increase your knowledge on the significant differences between novation and alteration, using easily understandable examples.

Novation implies the replacement of a fresh contract with the old or original one. The new contract may exist between the same parties or between different parties. There may or may not be any change in the terms of the contract. In addition, the discharge of the original contract acts as the consideration for the new contract.

It is worth noting that – novation is valid and enforceable only if all the parties to the contract give their consent to it, otherwise the old contract will stand valid.

Furthermore, novation takes place when the existing contract between two parties is terminated, in consideration of a fresh contract on similar grounds between one of the existing parties and a third party, or two completely new parties.

Moreover, due to any reason the new contract remains unenforceable, the old contract revives and parties have to perform their respective obligations.

Amit paid Rs. 20,000 to Vijay, as an advance for delivering Home Theatre System on Diwali. Vijay ordered the system. But as Amit owed Rs. 20,000 to his friend, the parties agreed that the system would be delivered to Amit’s friend’s house who will pay the remaining sum due to Vijay. Therefore, the existing contract will be substituted for a new one.

Alteration simply means variations in the terms of the contract. Alteration involves making changes in the old contract, i.e. adding new terms and conditions or modifying/removing the old ones with the mutual consent of the parties concerned. In this way, the original contract is rescinded as it does not need to be performed.

Hence, the parties are required to perform the new agreed terms and conditions of the contract only. However, there will be no change in the parties concerned.

Mr. Jain is an event manager. Mr. Rao entered into a contract with Mr. Jain for his daughter’s wedding on 10 April 2020 in Bengaluru. But due to nationwide lockdown, the wedding date is shifted to November 2020 at Kolkata. And, the parties i.e. Mr. Jain and Mr. Rao agreed to continue the contract on the agreed terms. This would amount to alteration.

Important: In a written contract, if there is material alteration by one party without the consent of the other party, makes the contract void. This would result in the cancellation of the document and discharges the parties to perform their part.

What is Material Alteration?

For Example: Change in the rate of interest.

Key Differences Between Novation and Alteration

In the points given below, we have discussed the differences between novation and alteration in detail:

If there is no change in the parties then the nature of obligation needs to be altered substantially in the new contract, indicating the simple variation on the contractual terms. And so when the parties do not change it is alteration and not novation.

Difference Between Coercion and Undue Influence