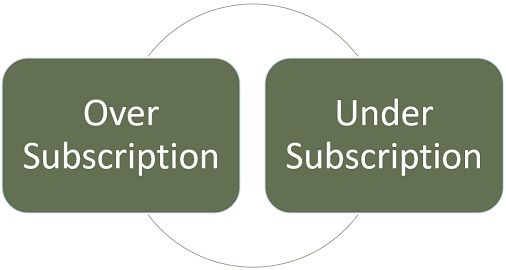 On the other hand, there are also certain cases when the general public subscribes for more shares than the shares offered by the company, then in this case over subscription takes place. In this regard, first of all, we need to understand the term full subscription:

What is a Full Subscription?

When the subscription received from the public is equal to the shares offered by the company it is called a full subscription.

When the shares of the company are traded in the recognized stock exchange, then the excess money received in connection to the application cannot be used towards allotments or calls. And the amount in excess needs to be refunded, or else the directors would require to return the sum with interest @ 12% per annum. However, when the company has obtained approval from the stock exchange then it can utilize the excess amount towards allotment or calls.

Alternatives for Over Subscription

Over subscription, there are three alternatives available to the company with respect to the allotment:

Letter of allotment is delivered to all the applicants and excess application money received in the application is not refunded rather it is retained and adjusted towards allotment and calls. If the entire issue price is needed to be paid along with the application, the excess amount over and above 10% of the securities offered has to be refunded.

3. Combination of the above two alternatives:

Note: Oversubscription received to the extent of 10% of the net offer made to the general public is allowable so as to round off the figure to the nearest multiple of 100, at the time of completing the allotment.

SEBI Guidelines for Over Subscription

Definition of Under subscription

Under subscription, as the name signifies, is a situation in which the application received by the company from the public is less than the shares offered. In this case, the company will keep a record of the actual number of shares purchased by public

Here, it is to be noted that the condition for a minimum subscription must be fulfilled by the company i.e. 90% of the issued shares must be subscribed for by the public, so as to allot shares to the public.

Accounting Treatment for Under subscription

Accounting is done in the basic manner as no special treatment is given. Further, journal entries are made as per the actual number of shares applied for and allotted to the public. By doing so the company can satisfy all the applicants.

What is a Minimum Subscription?

Minimum Subscription implies the least amount of capital mentioned in the company’s prospectus, that the general public should subscribe to, prior to proceeding for allotment. This is the amount which according to the company’s directors must be raised by issuing shares, to provide for the following:

SEBI Guidelines for Under Subscription

When the company has not received 90% of the amount issued from public subscription and accepted devolvement of shares from underwriters and other sources, in case of under subscription, within a period of 60 days, counting from the date of closure of share issue, the company is required to refund the full amount of subscription to the applicants within 78 days without interest and with interest for the delayed period past 78 days, @ 15% per annum.

Also Read: Difference Between Calls in Arrears and Calls in Advance

So, after going through the meaning and the basic guidelines, let us understand the difference between over subscription and under subscription:

Suppose ABC Ltd. has offered 10,000 shares to the public, however, the general public applied for 11,000 shares, it is called over-subscription.

Suppose ABC Ltd. has offered 10000 shares of Rs. 10 each, but the public has applied for 8500 shares only, then the issue is said to be undersubscribed.

Procedure for proportionate allotment of shares

Difference Between Calls in Arrears and Calls in Advance