Evidence refers to proof of facts or genuine information that reflects the validity or authenticity of a belief or proposition. In the eyes of law, all the documents or statement which are permitted by the Court or made by the witnesses in front of the Court, with respect to the underlying cause, is an Evidence. It can be of two types, i.e. oral evidence and documentary evidence.

Golden Rule of Law of Evidence

“In all the cases, Best Evidence must be provided to the Court.”

What is a Document?

When a certain matter is expressed or outlined on any material using letters, figures, marks, or a combination of these, with the intention to use the same for recording that matter. For example Writing, Plan, Inscription, etc.

Section 3, of the Indian Evidences Act, 1872, states that the documents presented for the purpose of inspection to the Court, are Documentary Evidence.

Primary or Secondary Evidence is used to validate the contents of the document.

Primary Evidence, as the name suggests, refers to the documents in their authentic or standard form presented before the Court for the purpose of inspection, to check its validity.

It relies on the notion of Best Evidence. As per the notion, the document must be produced in front of the court in its original form, because then only the document is unmediated and highly reliable. It is considered the most reliable copy because it is free from any tampering, addition, or omission. 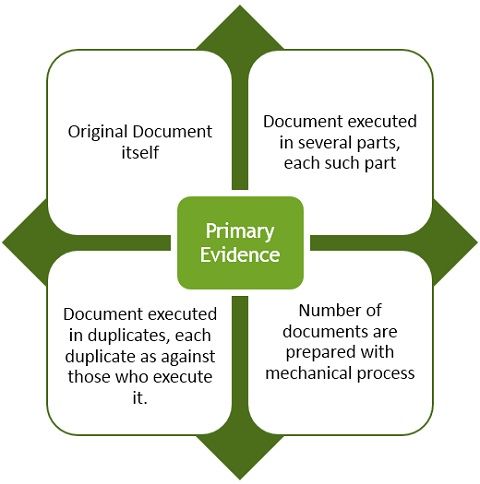 Secondary Evidence is also proof of facts like primary evidence but is comparatively less important in nature. 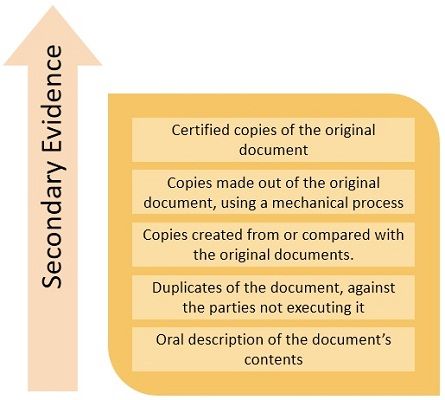 What all is covered in secondary evidence?

As of now, we have completely understood the concept of these two. Now, we will move further to discuss the difference between Primary and Secondary Evidence:

Suppose you go to a Photo Studio to get passport size photographs. All the copies received by you, in that case, acts as primary evidence as each photograph goes through the same mechanical process, whereas if you go to a studio to get the copy of a photograph clicked previously, then this will amount to secondary evidence.

When Secondary Evidence can be produced?

There are certain circumstances in which secondary evidence can be produced in place of primary evidence, provided certain conditions are satisfied: