In stratified sampling, a two-step process is followed to divide the population into subgroups or strata. As opposed, in cluster sampling initially a partition of study objects is made into mutually exclusive and collectively exhaustive subgroups, known as a cluster. thereafter a random sample of the cluster is chosen, based on simple random sampling.

In this article excerpt, you can find all the differences between stratified and cluster sampling, so take a read.

Stratified sampling is a type of probability sampling, in which first of all the population is bifurcated into various mutually exclusive, homogeneous subgroups (strata), after that, a subject is selected randomly from each group (stratum), which are then combined to form a single sample. A stratum is nothing but a homogeneous subset of the population, and when all the stratum are taken together, it is known as strata.

The common factors in which the population is separated are age, gender, income, race, religion, etc. An important point to remember is that strata should be collectively exhaustive so that no individual is left out and also non-overlapping because overlapping stratum may result in the increase in the selection chances of some population elements. The sub-types of stratified sampling are:

Cluster sampling is defined as a sampling technique in which the population is divided into already existing groupings (clusters), and then a sample of the cluster is selected randomly from the population. The term cluster refers to a natural, but heterogeneous, intact grouping of the members of the population.

The most common variables used in the clustering population are the geographical area, buildings, school, etc. Heterogeneity of the cluster is an important feature of an ideal cluster sample design. The types of cluster sampling are given below: 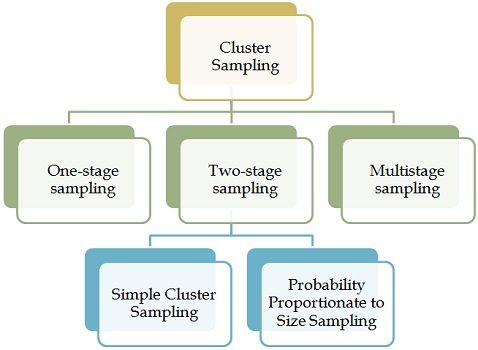 The differences between stratified and cluster sampling can be drawn clearly on the following grounds:

Difference Between Population and Sample